So you have a couple of cans of chicken broth sitting in the pantry for who knows how long. You’ve bought them on a sale, used a few, then during spring cleaning moved them to another cupboard and totally forgot about them.

Now they’re near the date on the label, and you’re not quite sure if they’re safe to eat. Does chicken broth go bad?

Or maybe you’re making your own broth, but you’re unsure how long does it last in the fridge. Or how to go about freezing it.

In either case, this article will give you the answers you’re looking for. Let’s get into the nitty-gritty of storage, shelf life, freezing and going bad of chicken broth.

How To Store Chicken Broth

Storing chicken broth is pretty much the same as storing beef broth, or any other broth for that matter.

When it comes to store-bought cans of chicken broth, you should keep them in a cool and dry place. The pantry is the best place, but a cupboard in the kitchen is a-okay too.

Once you open the can, you should store the leftovers in the fridge. Since it’s pretty much impossible to seal a can tightly, I suggest pouring the broth or stock into an airtight container, mason jar, or even a bottle. This way you can keep it properly sealed.

When it comes to homemade chicken broth, it goes into the fridge, pure and simple.

Last but not least, there are companies like Brodo that sell frozen broth. The packages are shipped frozen and delivered cold or partially frozen. For such broths, you should adhere to the company’s recommendation for storage. In the case of Brodo, you can either refrigerate the broth or refreeze it.

In case you wondered, all of the above, and the rest of this article applies to chicken stock too.

Can You Freeze Chicken Broth

Freezing chicken broth leftovers or homemade broth is definitely an option. If you aren’t able to use the broth within a few days, freezing is a tried and tested way of preserving it.

When it comes to how to freeze chicken broth, I recommend going with ice cube trays or small airtight container. This method allows you to easily thaw as much as you need at a time, without thawing all of it and refreezing the rest.

If your ice cube trays are too small, consider using a muffin tin instead. The method of freezing is the same as in the linked article.

For thawing, put the broth into the fridge the night before you need it.

When it comes to unopened cans, it makes no sense to freeze them. The tins last a really long time, plus freezing can compromise the seal, and that could result in a disaster in your freezer.

How Long Does Chicken Broth Last

Store-bought canned chicken broth usually comes with a best-by date on the label. That date indicates how long, at the very least, the broth should retain freshness.

Since almost all canned broths have preservatives added, and a can is a closed environment, the broth will stay safe to eat for much longer. And by much longer I mean years beyond the best-by date.

Of course, over time the quality of the liquid might suffer. That means that broth from a 5-year-old can probably won’t be as good as a fresh one. Once you open the can, you can keep the leftovers in the fridge for about 4 to 5 days.

When it comes to homemade broth, you can keep it refrigerated for about 4 to 5 days. It doesn’t contain any preservatives so it can go bad quite quickly. If you’d like to store it for longer, freezing is your best bet.

I’ve stored mine chicken broth for up to a week, and haven’t ever had any quality issues. So if you take good care of yours, it probably can last a week too.

Please note that the periods above are estimates.

How to Tell If Chicken Broth Is Bad?

Let’s start with an unopened can of chicken broth. If there’s anything wrong with the can, namely it’s leaking, rusting, or swelling, discard it. If it looks perfectly intact, it’s almost certainly safe to eat. It’s time to open it and check out the quality of the broth inside.

When it comes to checking if the broth is spoiled, a few things come into play.

A bad smell is the first indicator of a bad stock. If it smells sour, rotten, or simply not as it should, toss it out. The second sign of bad broth is mold or any other organic growth on the surface. If it’s present, get rid of the liquid.

Please note that if you don’t filter your homemade broth, there will be some sediment at the bottom of the container or bottle, and that’s okay.

If the chicken broth looks and smells okay, give it a taste and decide if it’s good enough to use.

Last but not least, if the broth sits in the fridge for over a week, just discard it. It might still be safe to eat, but there’s no point in risking food poisoning. Chicken broth doesn’t cost an arm and a leg, so you can always open another can. 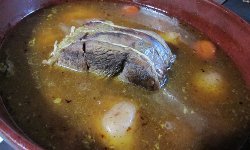 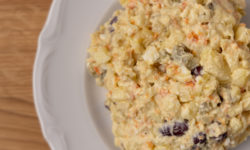 How Long Does Potato Salad Last? Can You Freeze It? 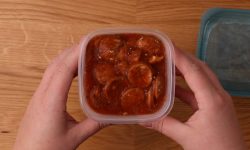 Can You Freeze Leftover Baked Beans? 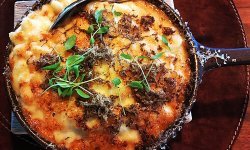 Does Mac and Cheese Go Bad? 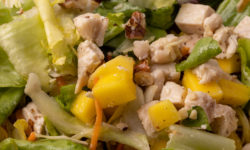 How Long Does Chicken Salad Last? Can You Freeze It? 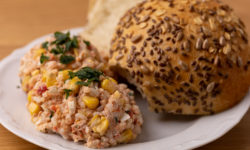 How Long Does Tuna Salad Last In The Fridge? Can You Freeze Tuna Salad? 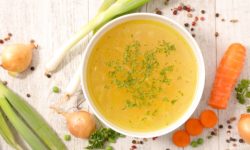